ToolsWatch was present at Rooted CON, the most important security conference in Spain to organize the Rooted Warfare, similar to the Black Hat Arsenal edition, allowing auditors, penetration testers and security experts present and show their tools to the community and interact with attendees. This time Rooted CON was held the 6, 7 and 8 March, being 7 and 8 with Rooted Warfare. To me (maxisoler) was amazing stay with the Spanish community, colleagues and friends, while others only knew through Twitter or blogs as Security By Default.

During these days were presented 12 amazing tools!

We will starting to publish videos and more pictures about it. 🙂 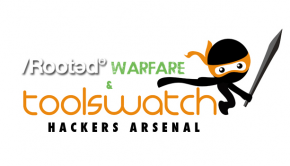