Last night I was contacted by one of the CSIRT‘s head of a large French company. We talked a lot about the shortcomings and mistakes which have benefited the replication of this new malware/wiper Petya.

He first told me how they were able to avoid the worst for their clients with a little common sense, reaction and a lot of intelligence. At this stage, the extra of tools and solutions did not help too much the unfortunate ones impacted. In fact, the management of IT security has become more complex with the introduction of new trend technologies.

The CSIRT‘s head explained to me that the information needed to prevent yet another WannaCry similar attack already existed. On the other hand, it required a little human intelligence to predict future events. Furthermore, one of the prerogatives of any threat intelligence team is to know how to read between the lines. In competitive intelligence, experts call this method: identifying signals and noises to anticipate threats and reduce uncertainty about the consequences of risks.

At this point, the Petya noises have gone beyond the fragmentary level and become strong signal . Before the Titanic sank, the crew knew about the iceberg but this information was totally ignored. It reminds me a quote from a movie I had seen long time ago. A guy was falling from a building and kept repeating to himself “So far so good, so far so good.” As long as he had not touched the ground, he was certain that everything was going to be okay.

Fact is when everything goes well, we drop the guard. The fallacy is we like to ignore signals until something wrong happens. One of the first triggers that should put all companies on constant alert was the NSA exploit leak incident. All conditions were met and a lot of infosec experts had already predicted massive cyberattacks using these exploits.

The first wave that took advantage of the 0days was not too long. The WannaCry ransomware was born and it has caused hundreds of thousands of victims to cry in the world. This is the direct consequence of the signal : 0day leakage.

Afterwards, most of the security industry vendors have taken the necessary steps to reduce and mitigate the WannaCry effect. An unequivocal chain of solidarity has even emerged in the infosec community in order to help the affected and reduce the proliferation of the malware.

A majority believed that WannaCry was just an episodic consequence of the exploits leakage. I was still convinced that similar or even sophisticated attacks would still take advantage of these exploits (I point out they are no longer 0day). While some dry their tears and others pretended to ignore. Petya / NotPetya (or called it whatever) erupts and shaves what WannaCry forgot to do. Except this time, Petya is not a ransomware but a destructive worm / wiper.

Let’s see what this CSIRT manager has exposed to me as a simple and effective way to counter WannaCry. And indirectly, it has proven to be successful as well for the Petya wiper. The CSIRT have developed a whole ingenious system around Splunk, Nessus alongside the integration of enriched and correlated CVE JSON reports daily provided by vFeed IO.

Checking the related Microsoft bulletins, reveals a lot of information. The Microsoft patch was published the 14th of  March 2017. It is tagged as “Critical”. At this stage, the CVSS is irrelevant.

The vFeed information shows that the exploit of this vulnerability has been implemented in Metasploit. This makes the attack even simpler to achieve.

The CSIRT team was also able to list all the vulnerable systems in the environment with a targeted Nessus scan. Indeed, vFeed also provides the associated scan scripts. This step can also be used with OpenSCAP or OpenVAS.

Intrusion Detection sensors were quickly updated with the right security rules (Snort and Suricata) by leveraging the information provided by vFeed. Any further attempts would be detected very quickly.

The CSIRT has drafted its security advisory for their customers by integrating all the necessary information regarding the Petya threat identification and mitigation.

What did go wrong ?

Normally with the damages caused by the WannaCry malware, most IT companies must be immune against this type of attacks. You know what: That was not the case.

IT security must be taken in the true sense of strategy and tactics. I’m not talking about business strategies and all this marketing crap that serve absolutely nothing except a waste of time. I evoke the stratagems of Sun Tzu and the principles of Machiavelli. You have a digital city to protect. Make sure you apply the right measures to defend your interests and those of your clients.

Efficiency of the Vulnerability Response With vFeed Intelligence → 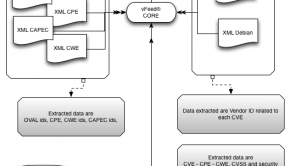 vFeed Python API v0.5.0 and introduction of the Search module →