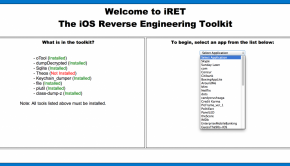 iAppliScan lets you automate the review of the iOS application with passing few parameters. It gives pointers to possible vulnerabilities […

iosForensic is a python tool to help in forensics analysis on iOS. It get files, logs, extract sqlite3 databases and […

apk_binder_script allows us to unify two apk’s in one or add a service apk smali code to the target. This […

The MobiSec Live Environment Mobile Testing open source project is a live environment for testing mobile environments, including devices, applications, […
12
Back to Top ↑